The Gloucester Gulls are proud to announce that they will be sponsoring Lee Mansell, the current Totquay United Player of the Year, for the 2007/08 season. 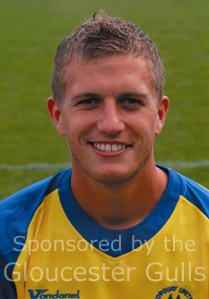 Lee Mansell is a local lad, having been born in Gloucester. For further information on Lee's career to date click here.

The PFA, together with the football clubs and a panel of sports journalists, have produced a top ten list for each club. The list for Torquay United is as folows:

Voting is being organised by Torquay United with votes being cast by e-mail. To vote for your favourite player from the short-list send an email to tufc.webmaster@hotmail.co.uk. The only thing to be aware of is that voting will close at 1 pm on Monday 25 June 2007 so get voting NOW !

...on TV next season ? The Setanta satellite TV station has signed a new contract to screen live games from ...   more »

Torquay United have unveiled the new home kit for the next two seasons. It is being modelled by Steve Woods ...   more »

Paul Buckle has today been named as the new manager of Torquay United. Paul's appointment officially starts on Monday 4 ...   more »